When Wallenius Marine and Knud E Hansen developed a ship design concept for Volkswagen, the Naval Architects took the degree of innovation to the next level. Learn how we reduced emissions from the vessels of the Sleipner concept, which is nominated to Next Generation Ship Award at Nor-Shipping 2022.

Sustainable shipping is about more than fuel choices. The design itself plays a big part in reducing emissions and the overall environmental footprint that we leave behind. Wallenius Marine and the Danish design firm Knud E Hansen have worked together on several projects before. This time, we put our heads together to eliminate something that is considered one of the basics in ship design since the time of the Wasa ship – the need for ballast.

Cargo vessels use ballast water to balance their weight and keep them stable during a voyage. Approximately 10 billion tonnes of ballast water are transported every year. Not only does it cost lots of fuel to lug the extra weight around, but it also spreads invasive species across the oceans with the risk of crashing local eco systems. In 2017, the UN International Ballast Water Convention entered into force. The convention entailed stricter rules on the management of ballast water, but as a result, many purify their ballast water with chemicals.

So, a lot of problems would be solved if a vessel didn’t need ballast water at all. But how could you achieve that?

“We moved the deckhouse forward and down, which creates better balance for hull optimisation and a lower center of gravity,” says Christian Damsgaard, Head of Naval Architecture at Knud E Hansen. “These adjustments contributed to a lower hull resistance and removal of ballast water. This vessel will not need to carry any ballast water when fully loaded, and therefore the fuel consumption can be reduced.”

Generator cuts up to 10% of emissions

Another fuel saving feature was made with the introduction of an active front end-type shaft generator. Instead of producing power for fans and accommodation etc by 4-stroke generator sets, the power is produced by a more fuel-efficient 2-stroke main engine. Depending on the operation point, the fuel saving of the generated power can be as much as 10 %. A shaft generator means less CO2 at an additional initial cost, but one that will pay off in the long run thanks to lower fuel consumption.

Faster loadings thanks to optimized ramp

“The layout of the ramp system is also highly optimised for loading cars, having one long ramp that serves all the decks. Loading and unloading the ship can be done faster, which is time saving when in port and thus allows for lower speed at sea. That’s extremely important – because at higher speed, fuel consumption increases exponentially. For example, a 1 % reduction in speed results in fuel saving of about 3 %,” says Christian Damsgaard.

Much thought has also gone into the look of the vessels, with their aerodynamic shape that helps reduce wind drag by a third compared to conventional designs. The ambition was to make it as sleek as possible, for example by putting all ventilation below the weather deck to limit protruding objects. The ship’s design follows that of a car in many ways. “It’s both practical and aesthetic. It gives the ship some character”, says Francesca Arini, Senior Designer at Knud E Hansen.

Of course, the fuel choice is also of great importance. The vessels will be equipped with multi-fuel engines that can run on LNG and LBG as well as both regular and synthetic diesel. Looking even further ahead, the engines will also be adaptable for fuels that don’t even exist yet.

Carl Fagergren, Naval Architect at Wallenius Marine, predicts that choosing the “right” kind of fuel will be crucial over the next 10 years.

“I´ll think we will see more variation in the supply of sustainable fuels, based on what can be produced locally and the purpose of the ship. Changes are necessary, since there is a shortage of sustainable fuels, and prices are high. It’s matter of all-hands-on-deck now to lower energy consumption.

The design concept Sleipner was recently nominated as one of four designs for Next Generation Ship Award at Nor-Shipping 2022.

“It’s been a challenging year for the industry, and society in general, but the disruption has not slowed down the speed of innovation – and the depth of ambition – defining the maritime world at present. These four vessels are the embodiment of that drive, demonstrating breakthrough technology that has the potential to set new standards for owners and operators worldwide. There can only be one winner, but they should all be applauded,” says Sidsel Norvik, Nor-Shipping Director.

In the summer of 2021, Wallenius Marine and Volkswagen signed a contract for two multi-fuel vessels with the ability to carry 6,500 cars each. Wallenius Marine will lead the ship design and newbuilding project. After delivery, the vessels will be chartered out to Volkswagen Konzernlogistik GmbH & Co. OHG and transport new vehicles of the Volkswagen Group for at least ten years, with ship management from Wallenius Marine.

“We are now choosing the suppliers for the larger and heavier parts in cooperation with the shipyard. Knud E Hansen will then produce drawings for the detailed design based on the suppliers we choose, and the process of approval begins. The next step is to start cutting the steel, which is planned for the summer of 2022,“ says Dan Reineck, Project Manager at Wallenius Marine. 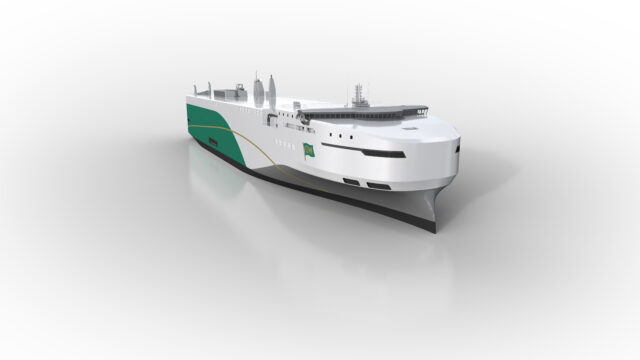