Original article in Danish from Maritime Danmark by Jens Nørgaard 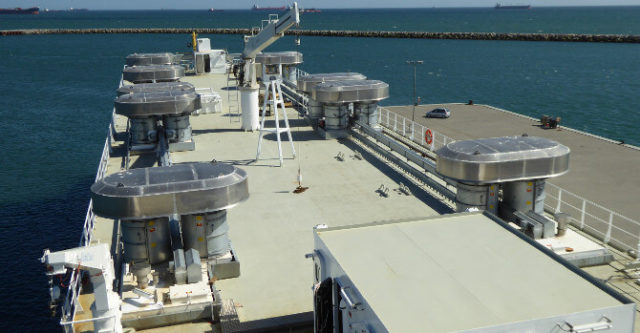 Corral Line ApS – a shipping company based in the southern Jutland Egernsund and a specialist in maritime transport of live animals – has sent a “new” ship to sea after a major rebuild in Poland and partly in Skagen, Denmark. Alondra is a former feeder vessel, which the Danish shipping company has had docked in Svendborg since 2012, in hopes of better times for the market. The converted feeder-ship replaces a former member of the “family” in Corral Line – livestock carrier “Falconia”, which was built in 1973.

Different work was done to the ship during its 4-year berth in Svendborg Denmark, at Petersen & Sørensens Motorværksted.  The main engine was overhauled, and the hull was treated in the workshop’s floating dock. The newly converted vessel is the largest in the company’s fleet of 3, and will be used to transport live animals between Australia and Asia, as well as the United States and Africa. Alondra was built in 1995 by a German shipping company – J. J. Sietas, in Hamburg, which is known for supplying two sister ferries to the Danish Spodsbjerg-Tårs crossing.

After delivery, the ship was operated as a feeder vessel in the Baltic Sea under the name “Alrek”, and later as “Transnjord”. The vessel sailed under the Gibraltar flag and was later changed to the Panama Flag – it still operates under the Panama flag today. The vessel measures 98 meters in length, and 16 meters in width; the design draft is 5.2 meters; and service speed is approximately 14 knots. At full load, the vessel will carry up to 2000 cattle. The total weight of the new design will be approximately 6,000 tons.

The crew consists of 19 people – all from the Philippines, where the majority have multiple years of seniority within the shipping company. Captain Rex Delapena has sailed with Corall Line for more than 10 years; boatman Brena Edison has been employed for 28 years. In its role as a cattle carrier or live-stock carrier, the ship has been renamed “Alondra”.

The former feeder was, in 2016, tugged from Svendborg to Gdynia for conversion at Nauta Shiprepair Yard SA, where the former cargo hold was expanded to be used as stables, and where the hull was also painted. Hull works were completed in February this year. Alondra was afterward sent to Karstensen Shipyard in Skagen, under the power of a Polish tugboat. The ship was docked there until mid-July; after which it was sent on to its first real job as a livestock carrier. For the yard in North Jutland, which has full contract books – special rebuilds and trawler renovations – for many years, the overhaul of the Alondra became an exciting task. And, also to subcontractors like Scanel International A/S, in Frederikshavn, which has been responsible for the electrical work on the ship.

With the fitting of stalls aboard Alondra – spread over five levels, there is room to transport up to 2000 dairy cows. The animals will be kept in booths with automatic water and feed dispensers; each booth has space for five to ten cows. During the journey, the animals will have space to lie down, and only need to stand up when they feed. Chief Commander Gregorio G. Jaca says that the animals quickly adapt to the new environment and the rolling movement of the ship at sea. On average, the journeys will take between 15 and 25 days. The booths are kept clean; animal excrements are washed down sewage gutters along the corridors, then flow into an excrement tank. Alondra has its own freshwater plant, whilst the cattle’s 340 tons of feed is delivered from lorries. Alondra will sail internationally, and the ship must be approved by the Australia Maritime Safety Authority (AMSA). The authorities from the Land Down Under have strict requirements regarding animal welfare, however, this is only expected to be a formality for the Danish-owned ship. Alondra recently went from Skagen to Waterford, south of Dublin in Ireland, to pick up its first load of livestock, to be delivered to the port of Bandirma in Turkey.

CORRECTED BASIS 1892 Corral Line’s story dates back to 1892, where it was originally named C. Clausen D/S A/S after the current owner’s, Bjørn Clausen’s, grandfather, Captain Carl Clausen. The company later changed its name to Sønderborg Rederiaktieselskab in 1980. Bjørn Clausen is the third generation of this shipping family. However, with a bankruptcy hanging over its head, it was decided in 2002 to divest the company and five ships to the Corral Line A / S subsidiary. The shipping company had been in severe difficulties due to the economic collapse in Southeast Asia, and outbreaks of foot-and-mouth disease in Europe and South America. This led to overcapacity in the market and had a big impact on the shipping company. Today, the shipping company is going strong. In Egernsund, however, they are still careful after the many ups and downs in the industry.

During its glory days, the South Jutland shipping company had 15 ships – including the EQ’s “Cambodia”, which was rebuilt and renamed “Linda Clausen”. As a ship owner, Bjørn Clausen belongs to one of the most experienced shipping families in Denmark. He has been on the board of the “Danish Ship owners’ Association” – now “Danish shipping companies”. He has also been on the Board of the Danish Maritime Fund for 10 years.