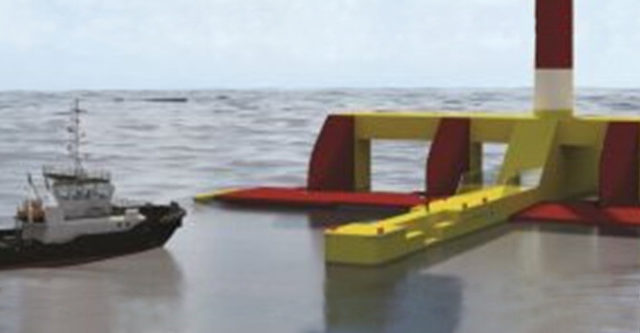 After 17 years of development and testing the Danish company, Floating Power Plant is ready to offer a tried and tested combined wind and wave power generator. Over the years the concept has grown from a small 2.4 metre unit through to a full scale unit 37 metres in size and the company is now ready to offer full size commercial units based on this long experience.

By combining power generation from both wind and waves these floating units offer a higher efficiency that units that just embrace wind power alone.

This first commercial wind and wave unit is the P80 which is a floating anchored structure connected to a turret mooring system. This hosts a single wind turbine that can range from 2.3 MW to 5 MW capacity. Tests have shown that a single turbine is the best option because it minimises interference between turbines and also considerably reduces the cost of the supporting structure. Floating Power Plant research has shown that a multiple turbine unit would lead to large and costly structures, which are also hard to build and transport, which would be very capital intensive and also be very difficult to maintain during a 20 year operational life.

The platform that supports the wind turbine also supports four wave generating units. These are rated at approximately 400-650 kW each, depending on the wave climate at the prevailing at the  selected installation site. Overall, the P80 system capacity can go up to a combined total of 7.6 MW of electrical output.

The P80 platform is anchored by using standard mooring technology that has been proven, and is still used, by the oil and gas industry. The system used is a disconnectable turret mooring system with slack catenary anchor chains. This allows the platform to vane through 360 degrees in order to continually face the prevailing wind and waves. The grid connection is also made through the mooring turret.

The platform is a large cross-shaped and semi-submersible device with 80% of the construction below the water line. The platform is extremely stable and moves at a very low frequency with the wave energy units also acting as movement damping units. It is estimated that the maximum movement of the platform would be between 3 and 5 degrees. The whole unit would be assembled in harbour before being towed out to sea and the prescribed 7 year overhaul would also be done in harbour after the unit was towed back to shore.

The wave energy system consists of hinged floats where the vertical movement of the float is translated into electrical energy via a hydraulic oil system. This has been tested at up to 64% efficiency but this is expected to improve when the units are scaled up to give figures of around 75 to 80%. Power is generated through both the up and down movement of the floats. Because the wave energy generator absorbs much of the power of the waves, boat access to the unit is safer because of the reduced wave motions in the lee of the unit.

The P80 has been developed to harness wind and wave energy on the western coasts of Europe and it can operate in water depths with a minimum of 45 metres. The P80 design is 80 metres across and has been developed from experience with a 37 metre wide test version that has experienced survival sea conditions during two years of exposure of the coast of Denmark.