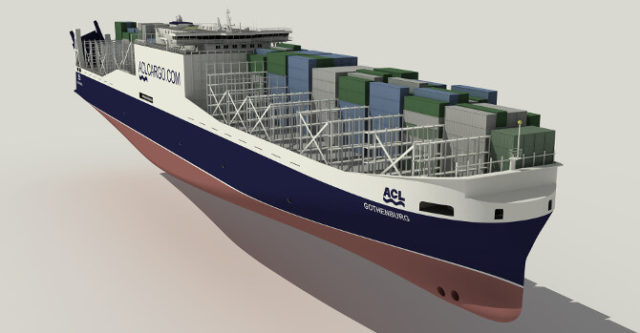 After nearly 30 years the five ConRos owned by the US-based company Atlantic Container Line (ACL) will come to the end of their operational lifetime. They will be replaced by five modern ConRo ships to be delivered in two month intervals from September on. Thomas Wägener describes the quintet.

The vessels of the so-called new G4 (Generation 4) class have been ordered in July 2012. Since 2013 they have been under construction at Hudong Zhonghua Shipbuilding (HSZ) in Shanghai. The quintet will be named »Atlantic Star«, »Atlantic Sail«, »Atlantic Sea«, »Atlantic Sky« and »Atlantic Sun«. The vessels are designed to handle containers, block stowed general cargo, wheeled units including heavy loads and cars etc. with fuel in their tanks. As first of the new ConRos the »Atlantic Star« will be delivered at the end of September.

The remaining four ships are scheduled to follow in a two month period. The 45,000 dwt vessels with the hull numbers  H1695A, H1696A, H1697A, H1698A and H1699A are 296 m long, 37.60 m wide and the maximum operational draught is 11.50m. They are able to carry 3,817 TEU. There will be 200 reefer plugs with remote reefer monitoring fitted in bay 22–24 and 28–32 on open deck above deck 4. At the start of operation these ships will be the largest of their kind worldwide, the company announced. »The G4s demonstrate to our customers and our staff that our parent company, Grimaldi, is prepared to invest for the future to maintain ACL’s unique position as a high quality container and RoRo operator on the North Atlantic,« says Andrew Abbott, President and CEO of ACL.

One significant change is the position of the bridge which is located amidships, same as accomodations, RoRo and car deck. In contrast to that, the container bays will be arranged in both ends of the vessel. The machinery which is located aft consists of an 8-cylinder Wärtsilä RT-flex 68 main diesel engine with a power of 22,000 kW. Four Yanmar EY26LW with 2,300 kWe each are installed as auxiliary engines. The machinery enables a vessel speed of 18 kn. According to KNUD E. HANSEN the fuel consumption per TEU will be reduced by 50%. A PureSOx scrubber solution from Alfa Laval processes the exhaust gases from the main engine. »In a newbuild project it is very important to fix the design of the scrubber system, which we were able to do quickly through good cooperation with Hudong and Alfa Laval,« says Abbott.

Prime mover, shafting, the five blade single screw fixed propeller and rudder arrangement are supplied by Wärtsilä and Becker Marine Systems. The rudder belongs to the flap type family of Becker Marine Systems. Furthermore each vessel is fitted with three thruster units, each with a power of 1,750 kW. Two of them are located in the bow area, one aft. The quintet has two anchors of about 12,000 kg each and chains with a total length of about 740m.

The vessels are RINA classed as container and vehicle carriers and are designed to ice class 1C. They are fitted with a ballast water treatment system with a capacity of 500 m3/h and with a waste heat recovery system as well as a frequency converter drive for large electric consumers, for example fans or pumps.

The Cargo Access Equipment (CAE) is supplied by MacGregor. That includes the hydraulic driven quarter ramp, a stern ramp on which the RoRo cargo enters the ship, as well as the watertight stern door with a clear opening of 22.70 m (width) x 8 m (height). Further equipment provided by MacGregor includes watertight and non wat ertight internal doors and the fixed cell guide system for stowage and securing of container cargo in holds and above deck 4. A total of 99 rain/weather covers are adjusted for the container holds. According to ACL all panels fit all locations. Each freighter is designed for a crew of 47  and has 35 cabins. The safety equipment features one free-fall lifeboat with a capacity of 47 and one rescue boat for five  seated passengers. Futhermore a total of 4+1 life rafts are installed, two on each side of the vessel, one on the mooring deck (deck 4).

The firefighting system is of great importance, too. A fixed high power water mist system is installed in the engine room, and the RoRo decks are equipped with fixed drencher systems.

Like their predecessors »Atlantic Cartier «, »Atlantic Companion«, »Atlantic Compass«, »Atlantic Concert« and »Atlantic Conveyor«, the new ships will be used between North America and Europe in the so-called North Atlantic »A«-Service. This route connects the European ports Liverpool, Antwerp, Hamburg and Gothenburg with Halifax, New York, Baltimore and Norfolk.