With 3 years of production time and 30 years of commercial life, ships designed today must be able to function well into a carbonneutral future. This is how a leading Danish ship design company relates to this challenge.

Article from SØFART “5 trends that are changing the shipping industry and how maritime companies are handling them”.

The climate agenda and binding international agreements on zero CO2 emissions from 2050 set a new framework for ship design. For how does a naval architect solve the task of designing a ship today that is to be built in 2 years, delivered in 4 years and have a commercial service life of 30 years? It means developing a ship that will be able to operate until 2058, which is quite a few years into an era of zero-emission, while some of the necessary technology does not yet exist,    furthermore, choosing the required carbon-neutral fuels in 2022 is extremely difficult, not least when considering the uncertainties of availability and price in 10,  20 and 30 years into the future.

We put the question to two of Denmark’s most experienced naval architects from the internationally recognised ship design company Knud E. Hansen, who have  developed new ships for shipowners from all over the world for more than eight decades.

ENERGY EFFICIENCY IS NOT NEW

Despite the challenge facing the industry, Finn Wollesen, CEO of Knud E. Hansen, initially draws both a positive and optimistic picture of the starting point for solving the challenge. “Ever since the mid-1990s, we have had to focus on energy efficiency when designing new ships, and new rules have continuously sharpened the focus. Initially, it was about the shipowner wanting to save money at the lowest possible bunker consumption. Now it’s about reducing CO2 emissions, but the approach is the same a long way down the line.” “Furthermore, we are dealing with a form of transport, which, from the starting point, is already in the lead concerning emitted CO2 per transported tonne when you compare it against trains, lorries and planes,” Finn Wollesen explains.

However, when the approach that has been used for decades to optimise energy efficiency is no longer sufficient to achieve carbon-neutral operation, only the use of new carbon-neutral fuels remains, and this represents a huge step,” explains Christian Damsgaard, Senior Naval Architect at Knud E. Hansen. Previously, it  was implicit when designing a ship that the fuel that a ship was designed for – typically heavy fuel – would be used throughout the ship’s estimated 30 years  of commercial life.

That predictability is no longer present for the ship design and the shipowner right now and in the coming years. “Now we’re not just talking about saving energy, but about alternative fuels, and that’s a huge step, as we’re looking into some entirely different ship designs. Some are still unknown, but with the alternative  fuels that are on the agenda right now, it’s clear that it will affect the cargo intake.”

“We must therefore accept that the ships of the future will have a relatively smaller cargo intake, as all the potential carbonneutral fuels that are currently on the agenda have an energy density that requires much larger bunker tanks than we have  been used to,” Christian Damsgaard explains.

When new ships are ordered, smaller cargo intakes per gross tonne can already be implemented in future business cases at the shipping companies. However, the situation is different when it comes to choosing a carbonneutral fuel. For methanol, for example, the engine technology is already available on the market, while  ammonia-powered ship engines will not become an available off the- shelf product for shipyards for at least a few years from now. However, the big question is and will be future availability and price. According to the currently most widespread political agenda, carbon-neutral methanol and ammonia must be produced according to the so-called Power-to-X principle, which means produced from excess electricity from renewable energy.

This is a resource that is expected to be in high demand in the future when world transport must be decarbonised by direct or indirect electrification.

This raises the question of whether the demand for ship design right now is put on hold by the shipping companies, as the business case simply contains too many unknown factors. “Yes and no, because the uncertainty also raises questions that we can help our customers find answers to here and now. We are increasingly finding that shipowners are asking us to look at their existing ships to assess whether it is worthwhile to have them converted to another fuel or whether they should be scrapped when they can no longer meet the requirements in their original form,” Finn Wollesen explains, and he is supplemented by Christian Damsgaard.

“No, it would not be correct to say that we are at a stalemate, and we are also still designing new ships now, despite all the uncertainty.  After all, there is nothing today that prevents a shipping company from ordering and commissioning a new ship that uses heavy fuel, gas oil or LNG. In return, our customers are now making some very explicit demands on us that they did not make before.”

With 3 years of production time and 30 years of commercial life, ships designed today must be able to function well into a carbonneutral  future.

“In the design, we must thus take into account that the ship must be able to use another fuel after 15 years. Even though we cannot determine exactly which fuel it should be right now, we already know that the general arrangement will require more space for bunker tanks,” explains Christian Damsgaard.

“In a ship design, built-in flexibility and, e.g. striving for the greatest possible fuel efficiency are not new requirements for a naval architect,” Finn Wollesen points out. “In the 1980s, Knud E. Hansen was also often asked to incorporate flexibility in ship designs. At the time, it was not about fuels and bunker tanks but about preparation for a future lengthening. It was typically a requirement from the shipowners that there should be extra flexibility in a new build to enable a lengthening of the ship to accommodate a later increase in traffic on a route, without increasing the number of ships,” Finn Wollesen explains. Nevertheless,   there are significant differences between then and now. According to Christian Damsgaard, the differences involve disciplines that are far from the subjects  of scientific engineering, namely, such disciplines as divination and philosophy.

“Back then, we could make precise calculations of the strength and take into account that the hull would have to be extended by, e.g. 7 metres at some point. Now, we actually have to design and predict the future, which is a lot harder. And for our customer, it’s also about philosophy in these years, when he has to choose fuel to be used 10-15 years into the commercial life of a new build.” “What we know for sure is that it will not be possible to just take the gas oil out of the tank in 10-15 years from now and replace it with something else without it having a number of implications for the ship’s layout,” Christian Damsgaard concludes. 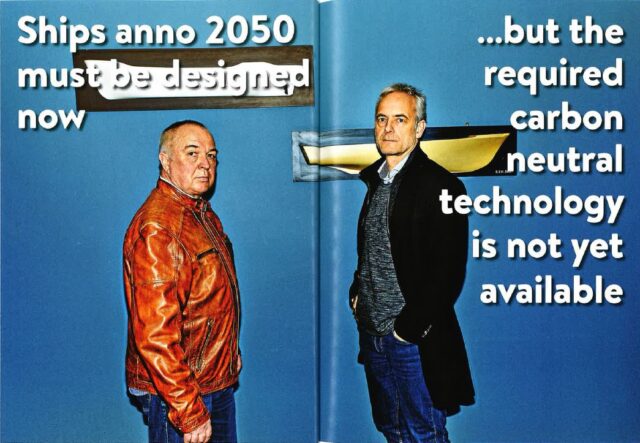 “Now we’re not just talking about saving energy, but about alternative fuels, and that’s a huge step, as we’re looking into some entirely different ship designs” CEO Finn Wollesen and Senior Naval Architect Christian Damsgaard, both with Knud E. Hansen.