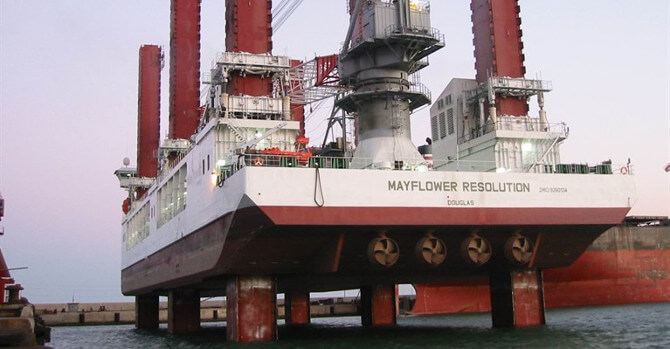 Governments in many of the industrialized countries are more and more committing themselves to bringing green energy from the margins into the mainstream, and a typical realistic target is to supply 10 % of the electrical power from renewable sources by 2010.

To reach such targets offshore wind turbine farms are very much in focus. Some farms have already been erected, but more are under construction or being planned.

And there are several good reasons for installing wind turbines offshore. First of all, the wind conditions are generally more reliable than onshore and the wind velocities are higher, but secondly, and not less important, is the fact that finding acceptable places for onshore turbines tend to become an increasing problem.

A typical 2 MW offshore turbine of today has a height of the gear house – the “nacelle” – of approximately 70 m above the water surface and the individual blades are about 40 m long, but much larger turbines are already being tested. In the near future the turbines will grow towards 5 MW, and such turbines will have nacelle heights of 90 to 100 m and blades of 55 to 60 m.

It goes without saying that installing these huge structures under difficult conditions miles off wind-swept coasts requires some very special equipment, and a few special vessels for the purpose are already in service, but they are only able to operate in relatively shallow and protected waters.

The U.K. company Mayflower Energy Limited realized more than three years ago that there would be a growing demand for safe and reliable large volume installations of offshore wind turbines, and KNUD E. HANSEN was invited to tender for the design of a special wind turbine installation vessel with much higher capacities than any existing vessel. The vessel should be capable of operating within a much wider weather window and on water depths ranging from approximately three meters to 35 meters. It should operate without the need for support vessels and it should have room for up to ten complete but unassembled 2 MW turbines on the cargo deck. The turbine installation rate should be at least one complete turbine a day in North Sea conditions.

KNUD E. HANSEN took up the challenge and the result became a 130 m long and 38 m wide self-propelled, self-elevating barge. The vessel is equipped with three bow thrusters and four 360° turnable stern thrusters and utilises a state-of-the-art dynamic positioning system to accurately hold it on location whilst the hydraulic jacking system raises the up to 14.000 t heavy load on six legs to the operational elevation of five to ten m above the water surface. Once out of the water, the barge provides an unparalleled safe and stable working platform for the 300 t main crane – unaffected by waves, current and tide.

Not only will this unique vessel be perfect for installing wind turbines, but it will also be most suitable for a wide variety of offshore work, including fitting foundations, providing all kinds of ancillary services etc.

KNUD E. HANSEN has made the Basic Design, including General Arrangement, hull lines, stability and weight calculations, engine room layout, system drawings as well as structural drawings and strength calculations for the vessel. In this context “Semcon Analys” in Gothenburg has conducted finite element analyses and fatigue calculations of the two crane pedestals. The jacking system is designed by the Dutch company “IHC Gusto Engineering”, and the two cranes are designed and delivered by another Dutch company – “Kenz Cranes”.

The vessel is built by Shanhaiguan Shipyard in China some 300 km east of Beijing, and the pictures below show the vessel at jacking trials by the Yard. The three bow thrusters and the four stern thrusters are visible along with the square legs and the main crane between the two aft legs.

The deckhouse forward can accommodate up to 70 persons.

It will enter into service by the end of February, and the first job will be at the turbine farm under construction at North Hoyle 4-5 miles off the coast of North Wales.